We have been in the most unusual circumstances we have ever seen with all the turmoil Covid-19 brought us. The factory was closed for 3 weeks and reopened on a skeleton staff which gradually increased in strength as order levels increased. We’re now as busy as ever!

Amongst all this though, we missed the opportunity to say a fond farewell to two well-loved stalwarts of Filon and we have just bid adieu to another long service member.

Ron Allen and Maggie Perks both retired in February and Les Williams retired at the end of August. Between them, they had over 115 years’ service! Ron devoted 46 years of his life to the company, Les 40 and Maggie 29 years. We are extremely grateful for their incredible contributions and are sad to see them leave us. 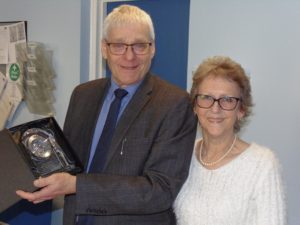 Ron joined British Industrial Plastics (the original owner of Filon Products) in 1973 as a Cost Accountant and moved to Filon in 1981. In time, Ron became a shareholder, Financial Director and then led a second management buyout in 2002, becoming Managing Director. Ron steered the Filon ship well, through some very difficult times including the financial crisis of 2008 and before that a move to different premises for the factory. No mean feat!

Maggie, loved by colleagues and customers alike, joined the Filon Accounts Department in 1990 and after 2 years moved to the Sales Office as a Sales Correspondent. She was later promoted and spent 10 years as Sales Office Supervisor. On Eric Burton’s retirement (after more than 52 years of service) she became Sales Office Manager for the rest of her Filon career and held the team together to provide the first-class service our customers have come to expect.

Les Williams finished his lengthy career at Filon as our Buyer and all-round inventor coming up with many great products and production solutions / improvements. After a short spell with us at the beginning of 1980 he returned, in August, later that same year to work on our production lines. A number of years saw him as a Production Chargehand before he joined the Maintenance Department. He then moved to a managerial position responsible for Secondary Operations. A stint as Assistant Production Manager followed but this was soon trumped by his promotion to Production Manager. Les was a part of the management buy-out team with Ron in 2002 and late in 2005 he became responsible for Purchasing, Site Customer Services and R & D where his brilliant engineering brain was used to great effect.

We would like to thank these amazing long-term members of the Filon team for their efforts, support and leadership over the many years and send them all the very best of wishes for a long, enjoyable and healthy retirement.

Category: Company News7th September 2020
Recent Posts
Categories
Archives
Go to Top
We use cookies on our website. By clicking “Accept", you consent to the use of these. However, you may visit "Cookie Settings" for more info.
Cookie SettingsAcceptRejectRead More
Manage consent