CHRIS PEARCE, PAST MD, RETIRES AFTER MORE THAN 3 DECADES’ SERVICE

After nearly 33 years Chris Pearce has retired. His last duty was today at an Advisory Committee for Roofsafety meeting which was followed by a presentation by current Managing Director, Steve Vickers.

Chris joined Filon in 1986 as General Manager when it was part of British Industrial Plastics which in turn, was owned by the Turner & Newall Group. Chris had worked for TAC, a roofing and cladding sheeting manufacturer which was part of Turner & Newall and his knowledge and experience resulted in his transfer to Filon.

By 1989, Chris had become Managing Director and was at the helm during the sale of Filon to another large corporation, RTZ.

In 1994, Chris led the first management buyout at Filon when RTZ was putting Filon on the market, and Chris and his team were responsible for Filon becoming self-owned for the first time since it started up in 1957. This meant that Filon was no longer part of a large corporation – a major turning point for the company and the key to its ongoing success.

In 2002, Chris and his fellow shareholders sold Filon in a second management buyout but continued to work for Filon in a consultancy capacity and continued to represent Filon on various committees and trade associations including the National Association of Rooflight Manufacturers, the Metal Cladding and Roofing Manufacturers Association, the National Federation of Roofing Contractors and the Construction Products Association.

Chris was one of the driving forces behind the Advisory Committee for Roofsafety (ACR), an organisation that has released numerous, free to download, publications about all things related to working with roofing products and working safely on roofs, a topic that Chris is still very passionate about.

After years of sterling service to Filon and the rooflight industry Chris has decided to call it a day and finally retire full-time from Filon.

Steve Vickers, on behalf of his fellow directors the management and staff, thank Chris for his dedicated service over more than 3 decades to Filon and the wider rooflight and roofing industry and wish him and his wife Helen, all the best for the future. 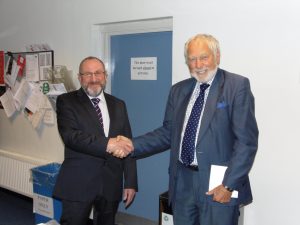 Category: Company News22nd January 2019
Recent Posts
Categories
Archives
Go to Top
We use cookies on our website. By clicking “Accept", you consent to the use of these. However, you may visit "Cookie Settings" for more info.
Cookie SettingsAcceptRejectRead More
Manage consent